Above: Photo of Savannah Churchill. Magazine article from 1952 is provided at the bottom of this page.

Listen to this week's selections: [Audio restoration by Dave Saviet.]

A) Click on an option below to listen to Savannah Churchill using Streaming Windows Media Player.

B) Click on an option below to listen to Savannah Churchill using Downloading Windows Media Player.

Rehearsing with quartet, Savannah Churchill goes over new songs in living room of her Brooklyn home. Four singers, called the Striders, travel with glamorous balladier creating musical background for her songs. While telephoning (below) she relaxes before evening's engagement. Gown of blue, trimmed in sequins, was made for her in London. 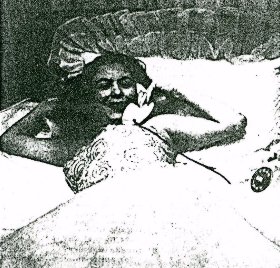 SAVANNAH CHURCHILL is striking proof that glamour does not necessarily desert a female performer with the advent of gray streaks in her hair and a matronly fullness of figure. Now 32 and still in steady demand across the country, the voluptuous Miss Churchill sells her brand of glamour quietly and with admirable dignity. Some of her most ardent admirers insist she will grow more beautiful and sing with richer feeling as the years roll on.

It is now four years [sic] since her biggest record hit, "I Want To Be Loved," was released. It has sold over 1,500,000 copies. That record rocketed Savannah to the top bracket of female singers and created a huge audience which she is still satisfying with her songs. This year she will work a total of 46 weeks and average $1500 a week. Savannah, a shrewd business woman who invests wisely and refrains from tall spending on non-essentials, believes a steady income of this kind "is a woman's best guarantee of a secure future." Her chief concern now is to educate her two sons and assure them a decent life.

Though the big bookings which bring the heavy money have dropped off somewhat during the last two years, Savannah Churchill's drawing power is still strong enough to keep her in the top ten money makers of America's women singers.

(Left) Baking cherry pie as well as singing, Savannah has testimony of neighborhood kids to prove it. Being expert cook is handicap to Savannah whose weight fluxuates greatly. "I lose it on the road," she says, "and gain it back at home."

(Right) New arrangement for recording session is gone over by Savannah with Howard Biggs, one of her arrangers. Miss Churchill, who now records exclusively for Manor Records [sic], rates Ella Fitzgerald and Bing Crosby queen and king of current singers.

(Below) In front of Brooklyn home Savannah Churchill finishes morning romp with Great Dane, Cheater, and three-year-old godson, Paul, who, with his mother Eula Mae Cassius, lives with Churchills. Dog which singer has had since birth is her only pet.

Billed far and wide by the flourishing Gale Agency as "the sultry siren of song," Savannah Churchill is one of America's great ballad singers. She sings her songs simply and with remarkable fidelity to the written tune. She does not go in for fancy deviations or fluent impressions. "I'm no stylist," she says. "I stick to the melody always." 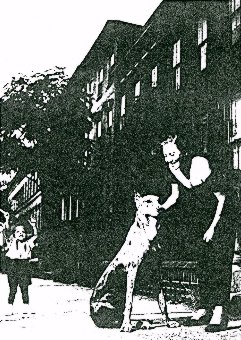 It is the warmth of her voice and the richness and strength with which she sings her songs that has made her unusual. But her very wide repertoire shows a musical versatility few singers possess today.

She is fully at home doing torch songs like "Is It Too Late?," "I'll Never Be Free" and "I Want To Cry." She also sings gospel songs with a fine feeling for the emotional values in them. This year she will make history by becoming one of the few pop singers to record an album of spirituals.

She sings "Daddy Daddy," her 1947 [sic] record hit with enormous gusto. But it is "I Want To Be Loved" that is most requested by her audiences. This song, which brought about her regeneration in show business, has now become her unofficial theme song. When "I Want To Be Loved," a hit tune, came out in 1948 [sic], Savannah was on the verge of quitting show business. Bookings for her were few and far between, and as a result her morale had sunk to a new low.

"The record put me back in show business," she admits. "At that time the breaks seemed to be going against me. I was pretty disgusted." The record and the demand it created for her catapulted her from a previous high salary of $300 a week in 1944, to a peak of $1750 weekly in 1951.

Her early years in the singing field were dominated in a way by Benny Carter, one of the top jazzmen of them all. She was the vocalist with the Carter band for four years. During that time a lot of the celebrated Carter musicianship rubbed off on her and she became a vastly improved singer. She and Benny became engaged but later agreed to call it off after a few disagreements. She still adores him for his tremendous talents and he considers her his best protege.

When she left Benny Carter, she felt she was ready to go for herself. "I think I've been a little lucky," she modestly reports. "After all, I trained with one of the masters of modern music, Benny Carter." Last September she had the thrill of making a recording session with the musician she most admires. Carter played alto sax in the background as she sang new arrangements of "Walking By The River" and "I'm The Greatest Sinner Of Them All." She thinks they are the finest records she has ever made.

[Above article provided by Richard Koloda.]