Above: Released October 1947. Although Bullet had a "race" series (250-346), this record was included in the "popular" series (1000-1059). Bullet, owned by Jim Bulleit and located in Nashville, was initially established in 1945 to produce "country and western" records.

Both sides of this record feature whistling ŕ la The Four Knights. If anyone knows the members of The Five Bars or who is doing the whistling, please let me know.

Click on an option below to listen to "I'm All Dressed Up With A Broken Heart" using Windows Media Player.

Click on an option below to listen to "To Make A Long Story Shorter" using Windows Media Player. 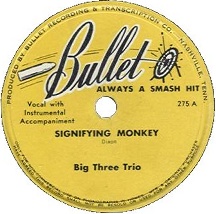