Above: Photo of The Five Keys. (L-R) Rudy West, Maryland Pierce, Ripley Ingram, Ramon Loper, Bernie West. This is the line-up that recorded "Close Your Eyes" and all subsequent Capitol sides.

Click HERE for an article about The Five Keys by Marv Goldberg. (Will open in a separate window)

Above: 78 RPM label image for "Close Your Eyes". Maryland Pierce sings the main lead and Rudy West does the responses.

NEWS RELEASE 2/5/55:
[Ulysses S. Hicks, a member of the r&b group the Five Keys, died of a heart attack in Boston on Tuesday (1). The group had just appeared at the Court Theater in Springfield, Mass., with the "Top 10" show before the death of Hicks. Rudy West, who just returned from the service and had been with the group previously, rejoined the Keys the next day.
The Five Keys are one of the oldest groups in the r&b field. They have been stirring up a lot of action with their new waxing "Close Your Eyes" and currently have a hit on Capitol with "Ling Ting Tong".]

Click on an option below to listen to "Close Your Eyes" [78 RPM] by The Five Keys using Windows Media Player.

At left is disc jockey Alan Freed. Here is a Windows Media Player clip of Alan playing "Close Your Eyes" on his March 23, 1955 radio show.

Click on an option to listen to the Alan Freed Clip: 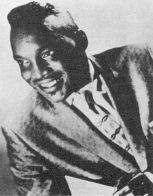 In addition to "Close Your Eyes", Chuck wrote several other hit songs, including the following two excellent compositions: