Click HERE for an article about The Drifters by Marv Goldberg.

CLIPPING OF THE DRIFTERS IN AUGUST 1954 ALAN FREED EMCEE'D STAGE SHOW IS AT BOTTOM OF THIS PAGE.


Above Left: Photo of Clyde McPhatter.

Above Right: Label image for Atlantic 1006 recorded on August 9, 1953 and released in September 1953. It was The Drifters' first release on the Atlantic label. This is the classic group with Clyde McPhatter singing lead on both sides. 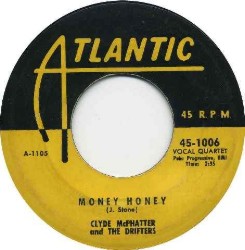 A) Click on an option below to listen to Clyde McPhatter And The Drifters using Streaming Windows Media Player.

B) Click on an option below to listen to Clyde McPhatter And The Drifters using Downloading Windows Media Player.

(August 14, 1954): Headlined by Roy Hamilton and the Drifters, the "Biggest Rhythm and Blues Show" last Friday night drew 9,600 music and dance fans to Cleveland's Public Auditorium. It was strictly an interracial affair.

With Alan "King of the Moondoggers" Freed, acting as master of ceremonies, the presentation's terrific lineup of stars; Hamilton, the Drifters, Fay Adams, Big Maybelle, LaVern Baker, the Counts, the Spaniels, Erskine Hawkins' orchestra and Rusty Bryant's sensational young orchestra from Columbus, Ohio, drew wild applause from the nearly ten thousand followers of blues and rhythm who turned out for the affair.

There at Public Auditorium Friday night was a dance crowd and a show crowd at its best. Beautifully gowned teenagers and young matrons, accompanied by their boy friends and husbands, danced to the music of the Hawkins and the Bryant bands, sat in rapt attention in the vast balconies of the auditorium (designed to accommodate a total attendance of more than 15,000) or stood around the bandstand as their favorite stars sang and played for their enjoyment.

Certainly it was a smooth evening for the many thousands who attended, and certainly it was a gratifying experience for Cress Courtney, Al Wilde and Tim Gale of the famed Gale Theatrical Agency. It was they who sponsored this second of a summer series of blues and rhythm shows.

"Moondogger King" Freed was at his best as he held command of the mike, surrounded by the young Clevelanders and northern Ohioans whose idolization has made him one of America's most outstanding disc jockeys.

From Freed and from the promoters of the affair, through Lew Platt, widely known throughout Ohio as a promoter and a civic worker, there came, Monday, a commendation to the CLEVELAND CALL & POST and to John E. Fuster, advertising representative, for the part this newspaper played in making this year's "Biggest Rhythm and Blues Show" the terrific success into which it developed.

Back to the show: Nothing but top-notchers were featured at Friday night's presentation, so there were no let-downs in any part of the program, but Roy Hamilton, clean-cut young singer from the East, must here and now receive credit as the star among stars ... the performer who was given the greatest ovation and whose songs were received with the most thunderous applause.

Roy, recently sky-rocketing to national fame on his recording, "You'll Never Walk Alone", stole the show, just as he stole the "Star Night Show" at Cleveland Stadium just a few weeks ago.

To sum it up, it was a great show—and a great night—for the performers, for the promoters and for the young men and women whose attendance made the entire affair a possibility.

[Above clipping provided by Richard Koloda.]