Savannah Churchill was born Savannah Valentine on August 21, 1920 in Colfax, LA. Her first two records were for Joe Davis' Beacon label, recorded and released in 1942. The labels first credited "Jimmy Lytell and his All Star Seven, Vocal Refrain by Savannah Churchill". Both records became hits, selling several hundred thousand copies. Due to Savannah's resultant popularity, Davis changed the labels to "Savannah Churchill and her All Star Seven" for future issues. 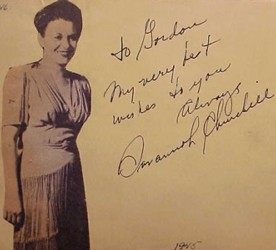 Savannah next joined Benny Carter's Orchestra in 1943, recording at least five sides. This resulted in two Capitol releases, one side each with "Vocal by Savannah Churchill".

In 1945, Irving Berman signed Savannah to Manor Records. Her third record for Manor, "I Want To Be Loved", was her first with a vocal group. Their name was The Sentimentalists, a male group derived from The Brown Dots and soon to become The Four Tunes. One of The Sentimentalists, Pat Best, was a major factor in "I Want To Be Loved" becoming a big hit. He wrote the song (even though credit is given to Savannah on the label) and coached her in how she should sing it. (Click HERE for video) 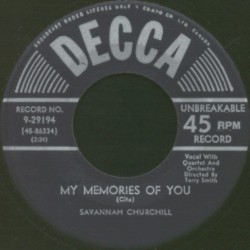 From here on, male vocal groups would back most of Savannah's records. Next came two releases on Manor with backing by The Five Kings. Then, eight records on Manor and one on Arco, all with The Four Tunes on one or both sides. Arco was the new name for Manor starting in late 1949. Then came two more releases on Arco in 1950 followed by another two on Regal in late 1950 and early 1951, all backed by The Striders.

There was one record issued on Columbia in 1948. These were two sides that Savannah and The Four Tunes had recorded, but not released, for Manor. 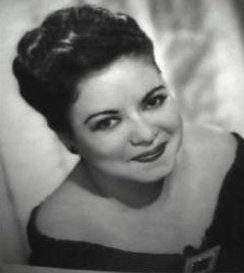 In 1953, Savannah went to another major label, Decca, producing five releases. The first is without vocal group on either side. The remainder have vocal groups on all sides, two with The Ray Charles Singers and the final two with an unknown "Quartet". 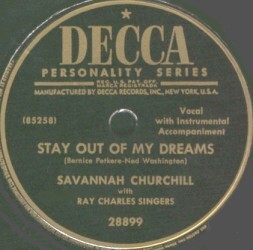 There was one more release of note in 1956 on Argo, a subsidiary of Chess Records. This record has an unknown vocal group on both sides.

Savannah died from pneumonia on April 20, 1974, leaving behind an abundance of consistently excellent records, including releases on four of the major labels.