From The Collection Of Paul Ressler


Above: Photos of Little Walter. See biographical notes below.

Above: Label image of Checker 764 recorded in October 1952 and released in November 1952. This was the follow-up Checker release to his big hit "Juke". In between, there was also one Chance label release of some of his earlier recordings.

News Release: December 1952: "The weird and spine-tingling sounds that emerge from the mouth organ of Little Walter assure the youngster of another big etching in his "Sad Hours" on the Checker label. This hunk of wax should outsell "Juke," the side which introduced the occasion..."

Listen to this week's selections:

A) Click on an option below to listen to Little Walter And His Night Caps using Streaming Windows Media Player.

B) Click on an option below to listen to Downloading Windows Media Player. 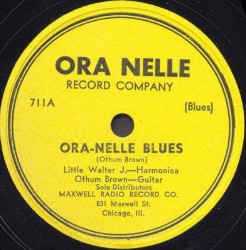 Marion Walter Jacobs (b. May 1, 1930 in Alexandria, Louisiana), influenced by the likes of Sonny Boy Williamson and Louis Jordan and his jump saxophone arrangements, quite simply revolutionized the blues harmonica technique when he showed up at Chicago's famed Maxwell Street market in 1947.
Among the hundreds of artists plying their trade in that environment he stood out to the point where he attracted the interest of the small Chicago labels Ora Nelle and Regal where he cut several sides. His big break came in 1951 when the Chess brothers, Leonard and Phil, hired him to back Muddy Waters and Jimmy Rogers, and it was as much his amplified harmonica that made hits out of "Mannish Boy," "I'm Ready," and "Standing Around Crying" [by Waters), and "Thats All Right" and "The World Is In A Tangle" (Rogers).
By 1952 he was assigned to the Checker subsidiary, and by that September he literally burst into prominence when the instrumental "Juke" streaked to # 1 R&B and remained there for eight solid weeks. This single was billed to Little Walter and His Night Cats.
The follow-up "Sad Hours" (instrumental) didn't quite repeat that success, settling for # 2 early in 1953, while the vocal flipside, "Mean Old World," reached # 6, both as by Little Walter and His Night Caps. Fittingly, Muddy Waters played guitar on each of these first three hits. 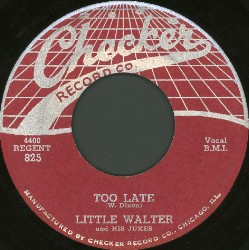 When his next hit reached the charts later that spring ("Off The Wall," # 8 as an instrumental, and "Tell Me Mama," # 10 as a vocal), he was billed as Little Walter and His Jukes in order to capitalize on his debut smash hit. The Jukes consisted of Chess sessionmen Louis and David Myers on guitar and Fred Belows on drums.
From there to 1959 he would add 10 more hit singles to his credit, his last coming in 1959 when "Everything Gonna Be Alright" reached # 25 (his lowest charter) as simply by Little Walter. These included the seminal "My Babe," written by Willie Dixon and based upon the old spiritual "This Train," which became his only other # 1 hit, staying at that position for five weeks early in 1955.
"By 1968 he was gone, leaving behind a legacy that harmonica players everywhere regard as, quite simply, the holy grail."

(NOTE: Images and audio on this week's page provided by Tony Fournier, except Ora Nelle label provided by George Moonoogian. Biographical notes provided by an unknown reviewer, except last sentence in quotes by Billy Altman)

This site is non-commercial. All information displayed on this page is provided to further the general public's knowledge of early R&B single artists.