Above: The Ravens and Dinah Washington clipping from November 1951 (courtesy of Galen Gart).

[The above and following newspaper clippings on this page were provided by Richard Koloda.]

Click HERE for a four part article about The Ravens by Marv Goldberg.

On July 19, 2006, 81-year old Warren Suttles accepted the Harlem Jazz & Music Festival 2006 Rhythm & Blues award for The Ravens. Click HERE for photos of the presentation (and of the award itself) at Marv Goldberg's website.

The above links will open in a separate window.


Above Left: Cleveland Call And Post (Feb. 7, 1948) One of the most important "firsts" in cutting records is obtaining a "perfect balance," and no one knows this better than ... THE RAVENS. Here they are trying to hit on another "top-seller" for National, listening to comment from the control room, check on a last minute balance before the master is cut. (ABOVE) from left to right: Warren Suttles, baritone; Jimmy Ricks, featured bass; Maithe Marshall, lead tenor; and Leonard Puzey, 2nd tenor.

Above Right: Cleveland Call And Post (June 28, 1952) DINAH WASHINGTON, currently the rave of New York's Broadway, tops the show at the Club Birdland there. Last Thursday, she received the acclaim of music critics when she was awarded a trophy by Downbeat, Cash Box and Blues And Rhythm theatrical magazines.


Above: Label image for (Left) Mercury 8257. Dinah shares the lead with Jimmy Ricks (misspelled on label). Although Hank Williams is credited as composer on the label, this is a different "Hey, Good Lookin'" song.

Listen to this week's selection by The Ravens and Dinah Washington: [Audio restoration by Dave Saviet.] 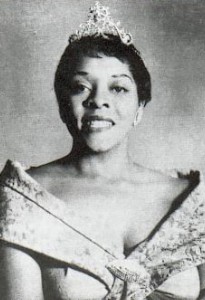 ANOTHER SELECTION BY DINAH WASHINGTON [WITH QUARTET]
(will open in a separate window):

MORE SELECTIONS BY THE RAVENS
(will open in a separate window):