by The Mystery Quartette
on Essex 706
released in 1950

(Thanks to Paul Ressler for the above photo!)

Above Left: The first of two records that The Mystery Quartette had released on Philadelphia's Essex label. Matrix numbers on this record are MQ-1 and MQ-2. Note that writer's credit is given to 'Best-Berman'. This is Pat Best of The Brown Dots/Four Tunes and Irving Berman, head of Manor Records, for which the Dots/Tunes recorded from 1945 to 1949.

Per George Moonoogian, The Mystery Quartette's second record was Essex 713 "Pretty Baby"/"Go Tell Your Troubles To Somebody Else".

The Four Tunes release of this great song wasn't until 1954 (although they backed up Savannah Churchill on this song on Arco 1236 in 1949). Interestingly, writer's credit is now shown as 'Pat Best' and publisher is Jubilee. There was another 1950 release of this song by The Masterkeys on Abbey 3017. Listen to all three versions below.

Click on an option below to listen to "Don't Cry Darling" by The Mystery Quartette using RealPlayer.

Click on an option below to listen to "Don't Cry Darling" by The Four Tunes using RealPlayer. 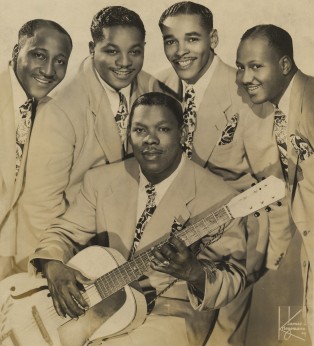 Click on an option below to listen to "Don't Cry Darling" by The Masterkeys using RealPlayer.

(Thanks to George Moonoogian for the label photo at left!)

Click HERE to listen (streaming) to all three versions in sequence.

At left is a 1993 photo of Pat Best who was the baritone in The Brown Dots and Four Tunes. In addition to "Don't Cry Darling", he wrote many songs including "Sentimental Reasons", "You're Heaven Sent", "Is It Right", "Where Is My Love", "Is It Too Late", "Wrapped Up In A Dream", "All My Dreams", and "I Understand (Just How You Feel)", etc. Berman had no involvement in writing any of these.

Here are Pat's memories of The Mystery Quartette

:
He watched them perform at The Little Rathskeller, a club in South Philadelphia. They were an excellent group with nice harmony. Billy Wells' brother, Ricky, was in the group (in above photo with guitar) and somone named "Bobby". (Note: Billy Wells would join The Four Tunes later) When they came on stage, it would be dark except for the guitar which was fluorescent!

Back to The Pat Best Web Site Main Page