Above: Excelsior Label, Released 1944. "Vocal Chorus Directed by Carl Jones"... anyone know if this is the Carl Jones who joined The Delta Rhythm Boys in late 1944? When listening to this record, notice Herb's rich baritone singing and the "talking" break, in the manner of an actor speaking his lines.

Early in his career, Herb sang with the Erskine Tate band (for many years one of the most popular bands residing in Chicago). In 1931 he joined Earl Hines, staying until 1934, and was then briefly with Blanche Calloway. In the early 1940's, Herb sang with Duke Ellington producing his hugely successful recording of "Flamingo". In the 1950's, Herb sang in clubs, often on the west coast, recording with Lucky Thompson, Bobby Hackett and others. A re-recording of Flamingo, this time with Les Brown, was also successful.

Click on an option below to listen to "At Least You Could Save Me A Dream" by Herb Jeffries and Three Shades Of Rhythm using Windows Media Player.

Above: Movie posters for "The Bronze Buckaroo" (1939) and "Harlem Rides The Range" (1939) starring Herbert Jeffrey (aka Herb Jeffries) with The Four Tones. A tall, strikingly good looking man, Jeffries appeared in four "all black" western movies (1937-39) made by black producer-director Oscar Micheaux. In these movies, Jeffries appeared as a black equivalent to the then popular white singing cowboys. The Four Tones also appeared in each of these movies. 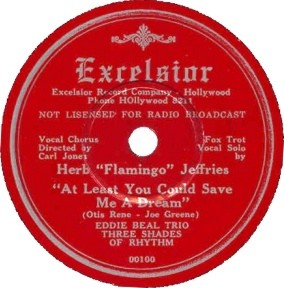 The Excelsior label (1944-51) was located in Hollywood and owned by Otis René.

At left is an alternate label design and number for this record, but with the same matrix number in the dead wax.

Brother Leon René owned the Exclusive label (1944-49) located in Los Angeles, for which Herb Jeffries also recorded. Together, the René brothers owned the Ammor and Make Believe Ballroom labels in the early 1940's.