"Rumors Are Flying" is the Benjamin-Weiss composed #1 hit for both Les Paul and Frankie Carle in 1946. "Sentimental Reasons" was composed by Pat Best and it reached #1 for The King Cole Trio and #2 for both Eddie Howard and Dinah Shore, all in 1946.

Click HERE for an article about The Brown Dots/4 Tunes by Marv Goldberg.
(Will open in a separate window)


Above: The Cash Box "Race Disk O' The Week" from 1949. From Left Clockwise: Ricky Wells, Billy Wells, Unknown??, Deek Watson. Can anyone identify the person in upper right of picture?


Above: The disk at left is the second version of "Sentimental Reasons" by The Brown Dots with Jimmie Nabbie on tenor lead, the first (see label below) had Joe King on tenor lead. Deek Watson does the "talking" part on both versions. On "At Our Fireplace", Deek sings the tenor lead.

Listen to this week's selections by The Brown Dots: [Audio restoration by Dave Saviet.] 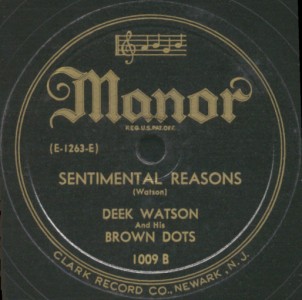 ALL THREE SONGS NOT FUNCTIONAL!


[Above Label: The first version of "Sentimental Reasons" on Manor 1009 with Joe King on tenor lead.]