[The above photo provided by George Moonoogian]

Above: 1953 photo of The Three Riffs. (L-R) Eddie Parton, Joe Seneca (also known as Joe McGhee), and Bunnie Walker (who had replaced Howard Green). Be sure to read the Amsterdam News article below.

Listen to this week's selections:

A) Click on an option below to listen to Streaming Windows Media Player.

B) Click on an option below to listen to Downloading Windows Media Player.

Trio Shared Many A Bowl Of Chili To Get Right Breaks 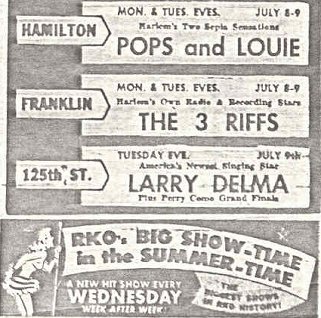 It's been a constant struggle with the Three Riffs as with all other young outfits seeking a break in show life.

Sometimes it seems they're headed places and, blooey, away goes that dream and they start building all over again.

Sometimes they've had to sleep on the floor, make one bowl of chili do as a dinner for all three, but still they doggedly plug.

Twas only yesterday when Howard Green, Edward Parton and Joe McGhee were singing in the Central High school glee club in Cleveland with Georgie Pace, the former N.B.A. bantamweight champion, singing with them. In those days all the other personalities at Central High were shaded by the greatness emanating from a slim brown human antelope, Jesse Owens, just then beginning to startle the world of track with his feats. Years before Central High School had graduated such notables as Langston Hughes, the celebrated playwright and novelist, and the internationally famous orchestra leader, song writer and musical comedy star, Noble Sissle. Thus, you see, the trio of Green, Parton and McGhee had plenty to live up to in advancing the tradition of Central High.

The boys came out of school in 1938, and when they reached New York, they were traveling under the somewhat ambiguous title of "Jungle Bugs". They made the trip East in a ragged old fliver and with $4.50 between them and starvation. They stopped at a rooming house at 130th St. and Seventh Ave. paying $4 for the room that housed all three. 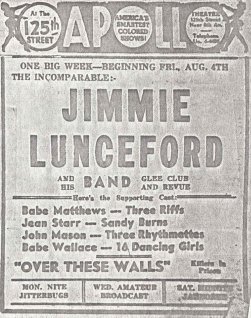 An Audition followed at the Apollo where they were lucky enough to make an appearance on August 4, 1939 with Jimmie Lunceford's band. In between time they were shuttling back and forth between Harlem and Cleveland.

"We landed a good break to go to the Apollo with Teddy Wilson," Edward Parton told the writer, "but Green messed up everything by losing our music on the subway. So we had to go back to Cleveland, so we could at least eat and sleep some place outside a subway or in the breadline."

"Being without music," he continued, "we learned to sing without it, and used the bass, drum and piano of the rhythm sections of whatever band we appeared with for balance. We started clicking and went to Chicago where we played the DeLisa for nine weeks and then to the Plantation Club in St. Louis and then back to New York."

In Harlem, the Three Riffs scored tremendously at the Club Mimo and then, after a misunderstanding over doubling at the Apollo, they left to go to Boston, where they found the best thing to do was to come back to Harlem as quickly as possible. 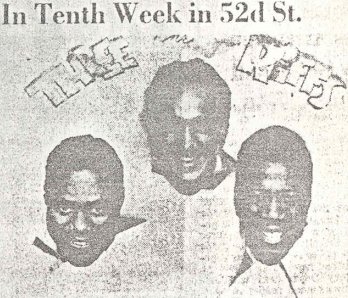 Ten weeks ago the three walked into the Famous Door in 52d St., talked to Alexander, Artie and Lew, operators of the place, and have been there ever since.

"We started working there on a proposition of increasing the business, you know, the old gag a down and outer attempts when trying for a straw. It clicked; we clicked and are doing fine." The Three Riffs, whose harmonies are weird, yet melodic, and who can dance as well, feature "I May Be Wrong", "Boogly Woogly Piggly", Topsy Turvy" and "Let Me Off Uptown." They're in line for a series of recordings, mainly because they offer something different.

[The above article and accompanying photos provided by George Moonoogian]